One Mr. Ernest Ebina from Cross River State, who was thrown down from a three storey building and tortured on the orders of one Commodore Yusuf Jogas Hina (RTD) has written a petition to foremost Human Rights Radio and TV show Brekete Family, Abuja, to make his “petition a subject of public glare.”

The electrician was in 2016, beaten for weeks and thrown off a three storey building which left him with a broken back bone, swollen stomach and now passes urine through tubes. See old report on the case: here 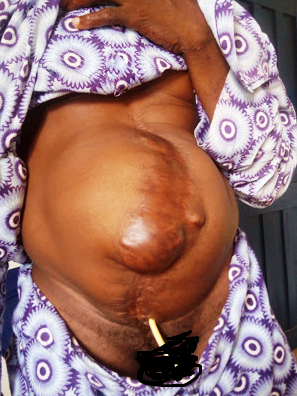 According to the petition obtained by CrossRiverWatch on Monday, the complainant, who hails from Abi local government of Cross River State stated that he was living with the Commodore in Port Harcourt where he worked as an electrician.

Mr. Ebina stated that the Commodore complained of missing the sum of six million eight hundred thousand and the wife of the Commodore accused him of taking it.

“From then on I was left to the mercies of my tormentors; Men and officers of the Nigerian Navy directly under the said Commodore Yusuf Jogas Hina,” said Mr Ebina.

“I was chained and tied like a goat into a sack and mercilessly beaten with all kinds of cudgels, weapons, wires and suspended in the air for upward of a week I was manhandled and given degrading treatment before made to face the fire of the men and officers of the Nigerian navy.”

“This horrendous and painful process of torture was initiated by Commodore Yusuf Jonas Hina RTD. who used his official boots to trample upon me, while his orderly used his rifle to panel beat me and the Commodore further ordered that razor blade be used to slice the skin of my thigh and salt and pepper added before lighting a candle to roast my thigh, the marks are still visible. I was thrown down from a three (3) storey building and left for death by the Commodore and his lackeys. Today I pass urine through tubes due to the mercies of God.”

The complainant added that he was tied to a bag and soaked in a pool for hours “to make sure that when I will be shot no blood will spill” but that the officer commanded to kill him abandoned him in the forest where a good Samaritan saw him and took him to the hospital.

ABOUT US
EyewitnessNG is a real-time incident reporting system created to give you real time reports of events happening around your environment as well as keep you updated with information.
Contact us: info@eyewitness.ng
FOLLOW US
© 2017 EyewitnessNG | All Rights Reserved
MORE STORIES

US reporter at scene of school shooting ‘finds out suspect is...